Moving as the film is, even more gut-wrenching is a global index published today that shows a staggering 29.8 million people serving as modern-day slaves in countries ranging from Nigeria to Myanmar.

Ten countries account for three-fourths of the world’s slaves, and India alone is host to almost half the total, according to Walk Free, an Australia-based rights group. While slavery is illegal in every country, the fight against it is not a big priority for most governments, and some forms of the practice – including forced marriage and trafficking of women and children for domestic work and as sex workers – may not be considered slavery in these countries.

Walk Free doesn’t break down the numbers to show how many modern-day slaves are women, but it’s likely to be a high proportion of the total. Yet there’s not much action on say, domestic workers in Asia or the Middle East, a practice that encourages the trafficking of women. Despite reports of violence against domestic workers in cities from New Delhi to Dubai, the demand – ironically fueled at least in part by greater numbers of working women – hasn’t abated.

Some Philippine recruiters recently decided to stop sending maids to Singapore till the issue of the payment of a placement fee is addressed – which often leaves maids with little cash in hand. Indonesia has demanded more safety for its workers in Singapore after a frightening number fell to their deaths cleaning windows in high-rise apartments. 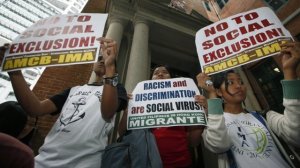 Yet, while the decision in Hong Kong to not grant residency permits to domestic workers who have lived there for years has fueled the debate for greater rights, there doesn’t seem to be a concerted effort to end slave-like conditions – or even grant a mandatory day off to domestic workers.

So for every country that steps in to try and protect the rights of its women who are trafficked to richer countries, poorer countries including Cambodia and Myanmar willingly send their womenfolk into slavery.  Public apathy is as much to blame as government inaction.