I ventured into this topic a few months ago here, when I visited my boyfriend’s homeland of Turkey, for 2 months.  In that time, my boyfriend became my fiance, hosts became family and, well, the entire trip was pleasantly hijacked.

In the weeks that ensued however, I did manage to do what I set out to do: spend time in Turkey’s capital, drive along the coastal towns, and reaching as far south as the city of Izmir, and ending of my whirlwind tour in Istanbul.  What I found pertaining to the hijab was little short of disappointing.

I still haven’t been able to engage with much of the pro-hijab audience, only with my peers who seem adamant that it not only comes from an archaic mindset, but that it is very much anti-Turkish.  This harmless piece of cloth seems a strong point of contention not only from a feminist perspective, but from a political one as well.  And since being an outsider, I could only go on the sometimes biased opinions of my guides, I had to maintain a polite distance from adopting these beliefs.

However even in my own observations, it was hard to deny that within the intellectual and middle to upper class world, the hijab was truly found few and far between.  Through my exploration of the countryside, stopping in villages to get gas, food etc., I did notice that something as seemingly harmless as knee-length shorts and sleeveless tank tops did gather me stares.  I am not sure if they were simple suspicion or judgement, but when they came from women covered head to toe in 40 degree celsius weather, I couldn’t help feeling guilty of something.

At one point, visiting the market and bazaars of Izmir, a city strongly loyal to the old rule under Ataturk, there was a strong air of modernism and progression.  Muslims were very proud to be Turkish, and were very clear to highlight that the two were not the same.

My personal views on the hijab still have not been swayed, only moreso affirmed, so I am not left with much to say, but I took some photos while I was in the Izmir bazaar.  It shows two clothing stores, side by side.  One is selling current demure clothing for the muslim woman who chooses to cover herself, and the other sells beautiful and vibrant traditional Turkish dress hailing from yesteryear.

I think they describe the state of flux that the hijab has created in Turkey, far better than I ever could. 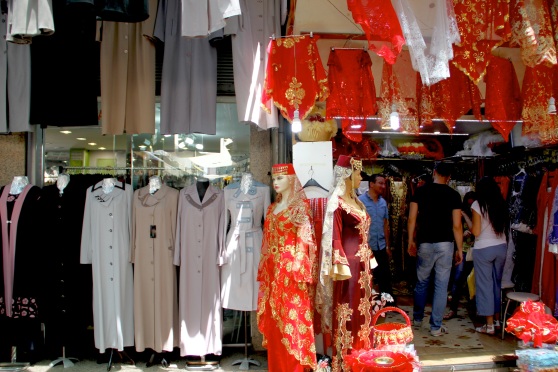 Contrasting storefronts in an Izmir bazaar

“Puffy-faced” Ashley Judd laid the proverbial smack down on critics recently, to which I responded from the other end of the cyberverse with a hearty punch to the air and a resounding “in yo face bitchez!”

From this, was a haunting reminder of a similar issue I have tangoed with all my life.

Growing up in the Caribbean, the “coca-cola bottle shape” reigned with sensuous superiority.  As with Latin America, parts of Europe, and other splashes on the global design, curves are synonymous with fertility, vitality, passion and lure. All the things that make a woman womanly right?  Wrong.  All the things that make a woman more of a thing, or a ting and less of the influential woman that she is, atop those sturdy legs of hers.  But it took me a while to learn this.

Cursed with the blessing of a high metabolism, lanky limbs and ectomorphic genes, I have spent the majority of my life being a twig.  Scrawny, “magga”, flat and toothpicky, and generally deemed unattractive by my male counterparts.  Compounded by very short hair, I spent most of my early teen years being mistaken for a boy.  In a society that drilled into me that I just wasn’t “womanly” enough, I ate the fattiest of foods in hopes that I would somehow develop the curves that would ascend me into this private club of bombshells stupifying men with the faintest twist of a hip.

In these years, I migrated to Canada. Now in North American territory, I was surrounded by girls who starved themselves in order to become “sexy.” WHAT? But I– What the hell was going on.  I spent all these years trying to get “thick” and now you tell me I should be thin??  And not just thin! Meatless. Buttless. Thighless.  You show a smidgeon of curvature and you are FAT!

Swimming through the murky waters of the physical female identity, I spent years learning that the checklist of qualities a woman must have changed faster than a stripper working double duty.  Hair this length, this colour. Serum to make eyelashes that much longer.  Boobs big, waist small, the ideal form being presented to us by a Mattel factory belt.  36-18-33.  Do they know that Barbie can’t stand up on her own?  Oh wait, of course they do.  It seems that this is what they want.  Docile, attractive arm candy, that needs support to keep her upright.

In my own quest for Adonis status, I have discovered strength.  Muscle mass, toned physique, abs, hamstrings, biceps.  My relationship with the Body, and the female form, has led me to decide I want to represent myself physically, the way I feel mentally. Which is what we of the fairer sex tend to do anyway, with fashion, with grooming, a first impression is all that much more important for us, than it is them.  I have found a harmonious relationship with fitness, where I can develop curves of a different nature.

Until I hear, “Oh my god, she looks so manly.” More criticism, yay. There are many women who tote the motto that Strong is the new Skinny.  And without fail the critics come running in to bash women with visible muscle definition, calling them “unfeminine” and “manly”.  I didn’t realize men were the only ones with muscles.

I have come to realize the only way to win at a game specifically rigged to see you lose, is to walk off the field.  Removing oneself from the equation. I’m going to keep lifting these weights. I will finally feel just as strong outside as I do inside.  And if they have a problem with me, I welcome them to come say something to my face.

I doubt they will.