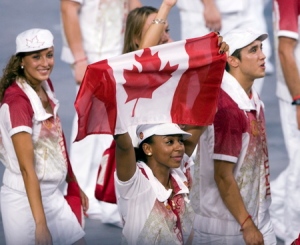 From time to time in Kitchener (where I currently live) there are these great moments of cultural ambiguity. And as most great Canadian moments, they centre around hockey.

A couple of weeks ago a friend from work took me to an Ethiopian restaurant for some truly delicious cuisine. He was the only white guy in the place though the restaurant was half full. The restaurant was full of energy as people talked and exclaimed at the hockey match playing on a big screen. We could have been in one of those ‘I am Canadian ‘ ads. It was such a surreal and gratifying moment.

I had another great moment last night at an Irish pub that serves the best pizza in town. Four of us were sitting at a table taking in a hockey match. The men at the table next to us were dark skinned and wearing turbans. The table over from them were white college kids in team jerseys. Our table had two white people, one mixed race man (my bf) and myself (Indian). Irrespective of race, everyone was totally into it.

Aren’t sports like that though? When in a group, you can’t help but get into it. I’ve read articles discussing the carnivalesque nature of sports, especially when national pride comes into play. The everyday divisions of ‘us’ and ‘them’ that in daily life divide by race, sex and political affiliation, all of these things melt away. Instead we become ‘Canadians’ versus the other team or nation. There’s unity there and actual acceptance. I saw that during the 2010 Winter Olympics when Canadians of all kinds were high spirited an united with a kind of pride.

Experiencing the World Cup while living in Toronto was amazing as well. When you walk around you see people sporting their nations flags. Strangers from different countries stop and talk, temporarily united in this fever. You could see what games were on each day by the enthusiasm on the streets. When Brazil or Portugal played, certain areas of the city would become a big street party and when Italy won in 2006 Little Italy closed of its roads and was totally engulfed with people.

There is so much to be said about sports and celebrations. I think that it must hearken back to some very basic cultural traditions that seem to pervade most cultures. The way that people are able to come together and get involved with each other during sport events is so different from the rest of the calendar year. It’s truly carnivalesque.

I suppose I am only now recognizing Canada’s pride in Hockey as the same thing I experienced in Trinidad with Football (Intercol memories anyone?).

For more on sport and nationalism check out Sport, Nationalism, and Globalization: European and North American Perspectives, by Alan Bairner.

One thought on “Hockey night”